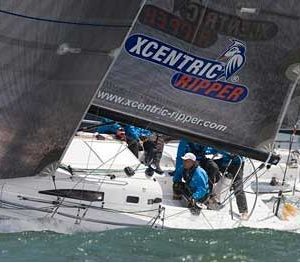 At the beginning of the season or actually already at the end of the last season we started to plan our races for the coming year. So we heard in the end of October 2012 that a European Circuit J/111 would be organized this year with the Europeans during Normandy Sailing Week as the most important event. After our successes in IRC last year and the pleasant experience of one-design racing during Spi Ouest 2012, our team unanimously decided to go for this one-design circuit and especially winning the Europeans would be our main goal.

So, in 2012, we quickly ordered a J/111 Class Main at North Sails, which is slightly larger than our IRC optimized mainsail, and we sailed the 2nd part of the winter series of Grevelingencup with this Class Main. After winning the Grevelingen Cup it quickly entered into the bag again just to be able to save it for the Europeans.

Normandy Week is sailed at the end of the Seine near Le Havre, so current is a very important factor in local tactics. Early on, current maps and information were gathered to be well prepared. Even some famous Belgian Laser sailors with local knowledge got us some extra info.

Composing the right crew was not an easy job for us. In IRC we normally sail with eight men, but as the J/111 Class Rules state that the joint crew weight may not be more than 650kg we have a problem. With the average stature of a Xcentric Ripper crewmember coming near a healthy viking, our only option is to sail with only 7 men. This naturally gives some disadvantage in handling and in addition you have only 5 man in the rail next to the mainsail trimmer and helmsman in the cockpit. In particular, when there is strong wind this is a disadvantage. How we solved this problem I will tell you later on.

The positions of the crew did not seem optimal, initially the ideal image normally is Berend Jan Edens as helmsman and my person as tactician / navigator, this works the best for us. Because Berend Jan said already in an early stage that he would not be availible during this period , so we had to find another solution. If BJ is not steering I will slide in, as during Commodores Cup 2012. Only it’s very important to have a well experienced top tactician, with good knowledge of boat on boat tactics. The choice soon fell on Richard van Rij, former crewmember of us during the period that Fred Imhoff used to sail with us. Richard is tactician in the Dragon Class on upper level, and has also good handling on an A-symmetrical boat because of our shared time on the J/109. He was very enthousiastic for this adventure so during the Grevelingen Cup he already sailed a few times with us to get to know crew and boat better.

Some members of the Technique-TP Forum visited our factory, and we also made a demo-training…

Buscar
Categorías
I am the footer call-to-action block, here you can add some relevant/important information about your company or product. I can be disabled in the Customizer.
Get In Touch
Copyright Xcentric Ripper - Todos los derechos reservados 2018
Back To Top